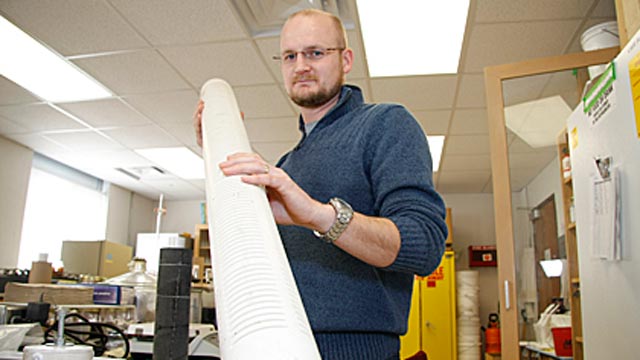 An experiment underway in a small Nebraska town may hold the answer to a common problem associated with industry — groundwater contamination.

If the results are as successful as preliminary reports indicate, then researchers will have found a vastly cheaper and easier method that could then be applied to a wider range of contaminates found in the nation’s water supply. “We’re always looking for new, better ways to handle the contamination and obviously the cheaper the better, as long as it can be effectively and safely done,” said Ken Rapplean a project manager at the U.S. Environmental Protection Agency (EPA). An estimated 15,000 sites across the country leach toxic chlorinated solvents into groundwater — anywhere an old landfill, dry cleaning facility or military installation might be found. Among the most common is a solvent typically used as a degreaser and metal parts cleaner, trichloroethylene or TCE. “Chlorinated solvents like TCE are quite common in any kind of industrialized area,” said Laurie Brunner, a groundwater geologist with the Nebraska Department of Environmental Quality. “It’s an unfortunate byproduct of industry.” Even places like Cozad — a small town of 4,000 in central Nebraska — have enough industry for TCE contamination. What it doesn’t have are the millions of dollars it might take to clean up the mess — particularly now that the town’s largest employer will close its doors in June. But researchers from the University of Nebraska-Lincoln stepped in with an interesting idea. They sunk more than 150 chemically treated wax cylinders — each about three feet long and three- to two-inches wide — into 31 locations, and then walked away. After 85 days, the water at one sample site showed significant improvement, dropping from about 400 parts per billion to just over 70. The EPA lists the minimum acceptable contamination level for TCE at just 5 ppb. A common treatment for TCE-contaminated water and soil is to introduce a much safer compound, potassium permanganate. On contact, permanganate breaks down TCE — a suspected carcinogen — into harmless materials like carbon dioxide and chlorine.

Steve Comfort, a professor of soil environmental chemistry at Nebraska, leads the research project. He said there is no doubt to the effectiveness of permanganate which he called “extremely efficient” at breaking down TCE. “If it comes in contact, it’s going to take it out — within a matter of minutes,” he said. “But it’s just getting it evenly distributed in the zone you want to treat is the real art of it.” Using traditional methods to get the permanganate into the desired zone at Cozad was problematic. In some cases, the ground can be so dense with fine sand and clay that pumping liquid permanganate is time-consuming, labor-intensive and expensive. It also usually requires several applications over the course of months and sometimes years as contaminated water slowly moves through the ground. Dense ground that cannot easily absorb liquids — low-permeable zones — adds to the challenge of pumping. In some cases the ground can be so dense, that the pumped liquid takes the path of least resistance, which is right back up the hole to the surface, Comfort said. “It’s a common problem,” he said. “Every site’s different, but low permeable zones, people run into that. They just can’t get the aquifer to take the material.”

In 1989, the Nebraska Department of Environmental Quality discovered a high concentration of TCE in Cozad’s groundwater. The apparent source: A nearby landfill that was shut down two years earlier by the state because it did not meet newly imposed containment requirements. Two decades later, despite a near $2 million effort, the contamination continued to spread. Then Comfort and one of his graduate students, Mark Christenson, overcame the problems when they incorporated permanganate into paraffin wax, essentially creating large candles that act as time-release capsules. The candles slowly treat the water as it passes by — with minimal effort and at minimal expense.

For the first time in Cozad, efforts have apparently halted a contamination plume that once relentlessly drifted below the surface — just feet above the Ogallala aquifer, one of the nation’s largest natural sources of fresh water. Laurie Brunner, the project manager with the Nebraska Department of Environmental Quality who oversees the clean-up effort in Cozad, said the downside to the candles is that the process is slower than more traditional methods. But she is also cautiously optimistic about the initial results. “I completely agree that preliminary results are encouraging,” said Brunner. “We’ll just have to see how much it impacts other parts of the plume in the contaminated area.” The idea of treating TCE with candles as a method for slow-release was first devised in 2004 by Frank Schwartz, a researcher at Ohio State University. Despite successful lab results, Schwartz never tested his idea in the field. The Nebraska project is the first known field test of the theory. If the project proves to be ultimately successful, the technique could be used in a broad array of applications, not just with TCE. Permanganate is equally effective on TCE’s cousin, perchloroethylene or PCE, a solvent common to the dry cleaning industry. Other compounds could be similarly combined with wax to clean other contaminants like gasoline or acids used in the mining industry, Schwartz said. “The candle idea is just a technique to release things in a controlled way and so you could accomplish lots of different things if you really want to do it,” he said. Christenson said the candles could equate to a “significant” cost savings. He estimated the cost for the current round of treatment at about $20,000, which was funded by grant money through the EPA. By contrast, a 2008 estimate by the Department of Defense — which often deals with TCE contamination at military sites — put cleanup costs with traditional methods between $1 and $5 million per acre, which is slightly smaller than a football field without the endzones.

The contamination zone in Cozad is just short of two acres. The approximate cost to make one candle is $30 dollars, and the only additional expense is replacing them every few years as the permanganate dissolves and oxidizes the TCE, Comfort said. Initial results show the once-drifting toxic plume in Cozad has begun to stop, reducing the risk that TCE could get into the city’s drinking water. Most recent tests show that Cozad’s drinking water — which is not treated before it reaches household faucets — meets EPA and state standards, and is safe to drink. Comfort and Christenson say their system could be better, and have already developed a second-generation candle they hope will prove to be even more efficient. Their latest version, however, has not gone beyond lab experiments, and will require additional funding for further research.

ABCNews.com contributor Charlie Litton is a member of the ABC News on Campus bureau in Lincoln, Neb.