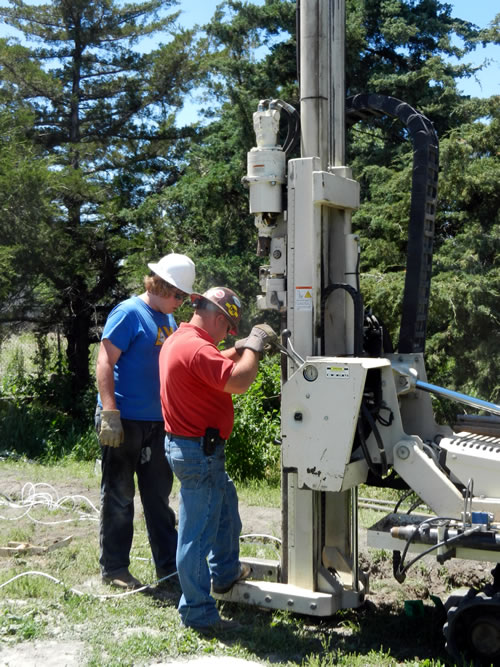 LINCOLN, Neb. — Sometimes rather thorny and extensive groundwater contamination problems can be overcome with the right combination of innovation, experimentation and partnership.

That’s what a researcher at the University of Nebraska-Lincoln’s Institute of Agriculture and Natural Resources is hoping will provide a possible answer for cleaning up a large plume of contaminated groundwater just east of Grand Island.

Earlier this year, Steve Comfort, a soil and water chemist with UNL’s School of Natural Resources, teamed with UNL graduate and undergraduate students and a local company run by one of his former students, to install a new version of an oxidant candle that holds promise as a method for cleaning up the Grand Island site.

The candle they have designed and made contains a chemical compound called permanganate that mixes with and oxidizes toxic chemicals, like vinyl chloride (VC), trichloroethylene (TCE) and perchloroethylene (PCE), turning them into harmless carbon dioxide and chloride.

Permanganate’s usefulness in helping clean up water and wastewater is well known; the trick is in finding innovative, simple and inexpensive ways to use it, which can help cash-strapped communities looking for pollution solutions.

Comfort and his students have designed and made other versions of the candles.

“We had been having decent success with our first generation of oxidant candles, (but) we knew that improvements could be made. The problem was I wasn’t sure where I was going to get the grant funds needed to pursue those improvements,” Comfort said.

That changed when UNL’s College of Agricultural Sciences and Natural Resources sent a group of faculty researchers to a grant-writing workshop three years ago. There Comfort learned of the many grant opportunities available for university researchers, if they were willing to collaborate with small businesses on joint research projects.

Unable to find the right business to partner with, Comfort reached out to his former graduate student, North Platte native Mark Christenson, and the student who had developed the oxidant candles for the first field research trials.

“These grants are really a win-win because they provide funds to the business and to UNL for joint research,” he said.

With the funds in hand, they began pursing improvements to their oxidant candles. “We had gotten good results with permanganate candles made from paraffin wax and granular permanganate, but that was in fine textured soils,” Comfort said.

In sandy aquifers like that at the Grand Island site, the permanganate has a tendency to sink when it dissolves from the candle. This could cause it to miss the target zone.

To combat this problem, the new candles have a custom-designed tip and aeration tube at their base that bubbles air up and around the candle, “lifting” the permanganate contained in them.

The new design doesn’t need a permanent well since it places the candle in the aquifer with a direct-push probing machine.

“We know from previous work that the bubbling can greatly facilitate the distribution of the permanganate, at least in tank studies and for candles placed in permanent wells, so we are hopeful that these direct-push candles with aerators will work in the field,” Christenson said.

Once installed, all airline tubes and candles are underground and all that is visible is a small shed containing an air compressor.

“Mark was one of my best graduate students, so it’s great to team up with him again to work on developing products that may someday provide a less expensive alternative to treating contaminated groundwater,” Comfort said.

The site of their learning and development research is on former Nebraska Solvents Co. leased property on Highway 30, just east of Grand Island. Industrial chemicals including TCE and PCE, once commonly used solvents, were stored there many years, as they were at many such places across the country. Some of those chemicals later leached into the soil and groundwater where over the years, soil microorganisms could break them down, forming derivatives such as VC, which is highly toxic and carcinogenic.

PCE contamination at the Grand Island site has impacted private water supplies east of there. The owner of the land, Union Pacific Railroad, has been voluntarily cleaning up the site as a participant in the voluntary cleanup program under oversight from the Nebraska Department of Environmental Quality, and in cooperation with the City of Grand Island, for nearly six years. UP has paid to extend city water lines and provided bottled water for impacted residents, as well as removing contaminated soil from the property.

High levels of VC found in the shallow groundwater there make the site ideal for Comfort and his fellow researchers to see if a newly developed permanganate “candle” will work to oxidize the contamination into harmless carbon dioxide and chloride.

“Dr. Comfort is in this particular location mostly because the conditions for his research are good. Groundwater just downgradient of the former Nebraska Solvents site is known to have VC significantly exceeding cleanup levels, groundwater is relatively close to the surface, and the aquifer conditions are conducive to transport of not only contaminants but also permanganate dissolved into groundwater from the candles,” said NDEQ site manager and groundwater geologist Laurie Brunner.

Early testing indicates the permanganate is migrating into the UNL team’s downgradient monitoring wells, Comfort said. “We will just have to wait and see how the aeration affects the permanganate distribution.”

On hand to watch initial installations of the oxidant candles at Grand Island were graduate student Ann Kambhu and undergraduates Wen Qi Ou and Xiaoming Yun, two environmental restoration science students who are at UNL finishing their degrees through a cooperative program with Northwest A&F University in China.

They had more than a passing interest because they have been assisting with the research in the laboratory by making candles and testing miniature versions of them, Comfort said.

“This has been a great learning experience for us and I’m happy to have been part of this work”, Ou said. Additional testing of the new candles at other Nebraska sites is planned later this year.