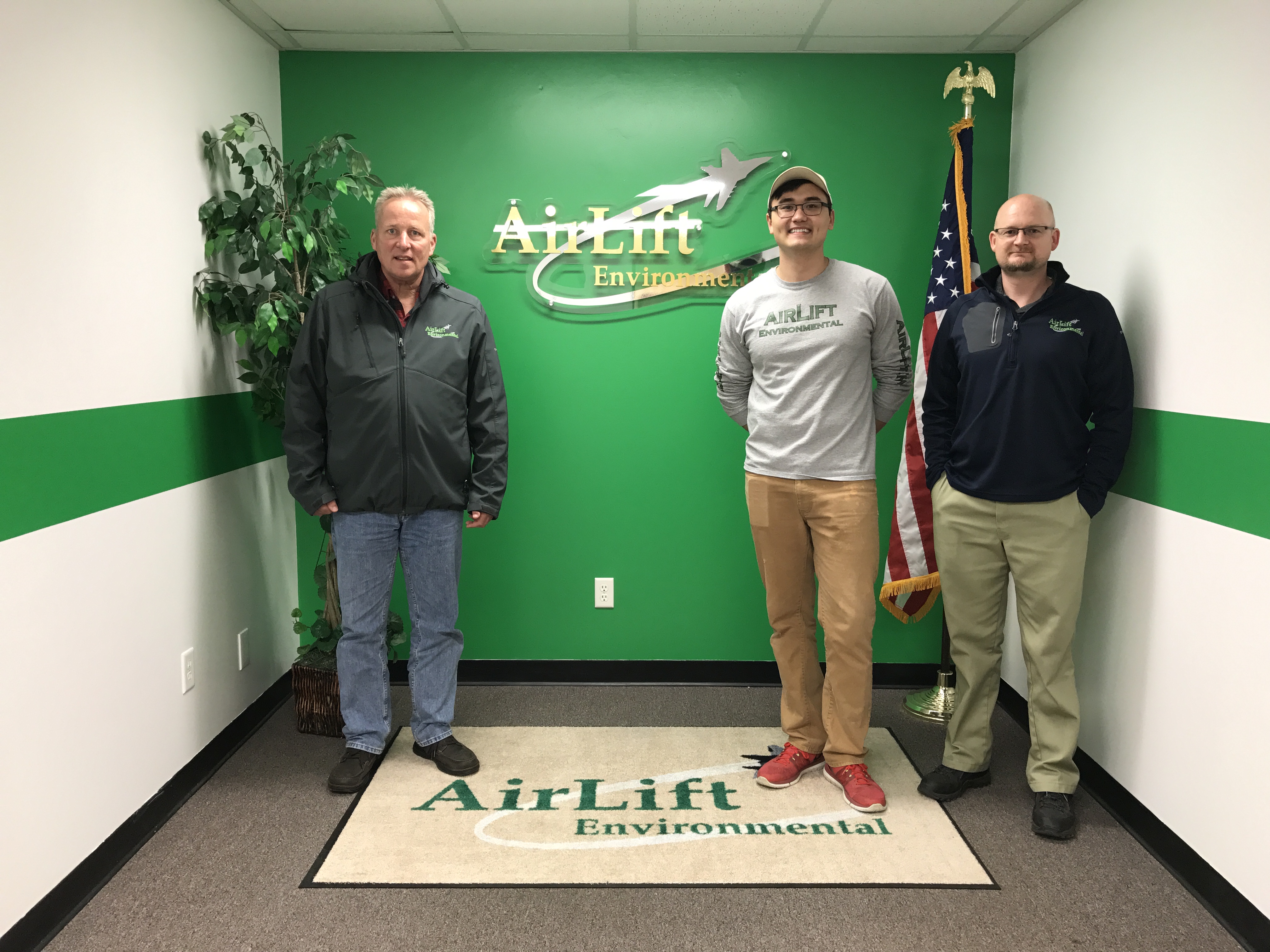 A Lincoln-based startup company that specializes in innovative, research-based ways of removing industrial solvents and petroleum-based pollutants from groundwater is taking off.

AirLift Environmental, 5900 N. 58th St., Lincoln, that began five years ago, is an outgrowth of scientific research that started at the University of Nebraska-Lincoln.

“It is gratifying to see that our years of research is bearing practical, easy to use treatments for cleaning up contaminated groundwater” said Steve Comfort, a longtime soil and water chemist in UNL’s School of Natural Resources.

For more than six years, Comfort and his co-researchers and graduate students have worked to perfect oxidant-paraffin candles, a chemical-wax cylinder containing oxidizing compounds, such as potassium permanganate or sodium persulfate, that transform toxic chemicals, like vinyl chloride (VC), trichloroethylene (TCE) and perchloroethylene (PCE), into harmless carbon dioxide and chloride.

Permanganates and persulfates have long been known to be effective in remediating these contaminants; the trouble is they are traditionally injected in liquid form and this heavier-than-water remediation solution can sink below where it is needed to treat groundwater contamination. “Traditional treatments inject liquid oxidants into the aquifer and these oxidants are carried away with groundwater flow. If the treatment doesn’t work within the first week or so, it’s likely not going to work,” Comfort said.

Through trial and experimentation at many contaminated sites across Nebraska, Comfort, his students and co-researchers perfected first, second, and now third generation Oxidant Candles® and a system to use them that negates that problem and is as user-friendly as dropping them down pre-drilled holes, where they slowly dissolve and intercept the contamination in the groundwater.

“Our oxidant candles provide a solid, continuous source of oxidant to the contaminated aquifer that can last months to years, which is an advantage over liquid injections” said Mark Christenson, AirLift co-founder, president and former graduate student of Comfort’s. The reloadable design developed by AirLift allows new candles to be easily installed when old candles run out, providing additional years of protection at minimal cost.

“Part of the trick in making this successful was finding a way to prevent the oxidant from migrating downward from the candles.”

“Pneumatic circulators were developed that aerated or released bubbles at the base of the candle to prevent the oxidant from sinking and facilitating its horizontal distribution throughout the aquifer,” said AirLift President and former graduate student of Comfort’s Mark Christenson.

The physical action of aeration, which prevents the oxidant from sinking is how “AirLift” Environmental got its name, he explained.

“We started AirLift as a way to compete for funding and keep the research going” said Comfort. “Mark and I have been meeting weekly since he graduated in 2011 and through perseverance and some luck, we were able to obtain Phase I and II small business grants from the National Institutes of Health.” This funding has allowed us to stay in research mode, improve the technology and involve others at UNL. Yusong Li, a professor in UNL’s Department of Civil Engineering, was also part of the Phase II grant and she and graduate students Chuyang Liu and Ann Kambhu are developing mathematical models that will predict how the oxidant will spread from the aerated candles in the field,” Comfort said.

“Airlift has taken the research into an established, commercial realm, a natural outgrowth of the research we began at UNL,” said Christenson. “Mark excelled at developing innovative solutions to groundwater contamination problems and his master’s thesis was the first to install slow-release oxidant candles in the field,” Comfort said of his protégé and business partner.

Christenson helped develop and test the first generation of the oxidant candles in 2010 when he was still a graduate student. Since then, he and Comfort have teamed with additional graduate students, UNL technologist Wei Tang, and AirLift researcher James Reece to refine and further test their candles. They even added solar-powered compressors to their system to aerate the candles and eliminate electricity costs.

Like Christenson, Reece is a former student of Comfort’s who has a well-rounded background in environmental chemistry and field experience to help AirLift develop and manufacture the paraffin candles. He is currently the company’s only full-time employee.

“We hit the jackpot when we hired James,” Christenson said. “He has really pushed AirLift forward in the last year.”

With current Phase II NIH funding, this private-university collaboration will be selecting and treating contaminated sites in Nebraska for “proof-of-concept” testing. This means testing their latest, reloadable version of the oxidant candles that can be installed with simple, direct-push equipment. This second phase of funding, which sunsets later this year also helps AirLift do on-site trials so the efficacy of the direct-push aeration candles candles can be tried under a range of soil and aquifer conditions.

Field results from contaminated test sites in Lincoln, Cozad, Grand Island, Beatrice and Sargent have all proven that the science, and the evolving technology of the candles and how they are used, are working as they are designed to, Christenson said.

“We feel real fortunate to have received Phase II NIH funding, which has allowed us to improve the candles, simplified the technology and continue to develop commercial products that can provide a less expensive alternative to treating contaminated groundwater,” Comfort said.